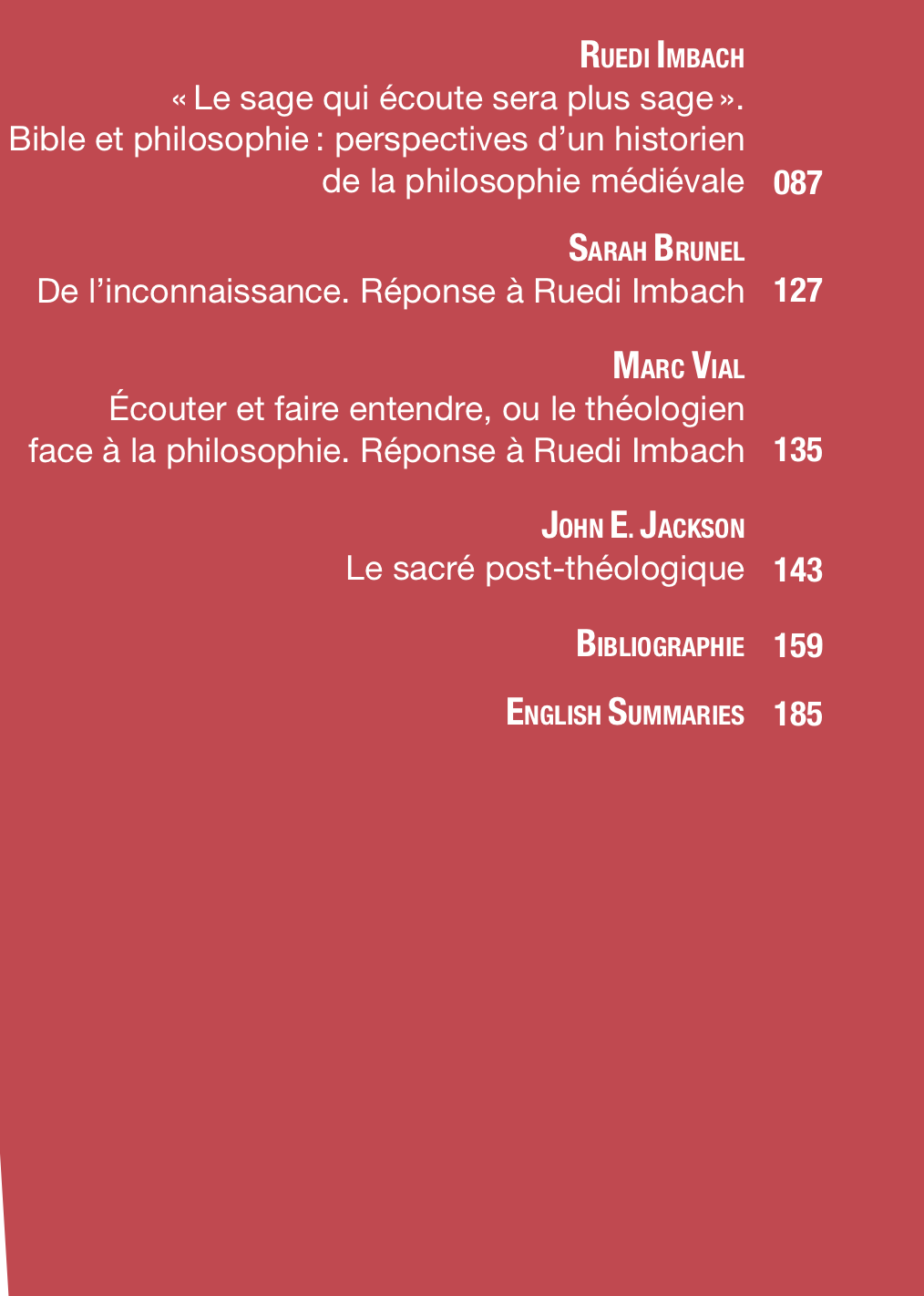 The present study addresses the question of the relation between the Bible and philosophy in the Middle Ages under three perspectives : first, through an analysis of the interpretation of the apostle Paul’s speech in Athens. Second, with a study of the exegesis of a verse from the Song of Songs (1:8), and finally through the examination of certain biblical passages’ direct influence on medieval philosophy (Ps. 13:1 and 52:1 ; Exod. 3:14). A close analysis of texts by Augustine, Thomas Aquinas and Meister Eckhart supports the conclusion that philosophy indeed influenced and modified the reading of the Bible, and that, conversely, the reading of the Bible stimulated the philosophical inquiry. Some remarks on the problem of atheism in the Middle Ages cap the study.

This brief response, by a philosopher and a phenomenologist, to Ruedi Imbach’s article focuses on the theme of « unknowing » and God’s unfathomability, with a focus on the story of the burning bush (Exod. 3). God does not manifest Godself in an image, but in the intimacy of an encounter and a word. God does not let Godself be contained in a being, God is not « fulfilled » but orientated toward an inaccessible end, toward an infinite.

Marc Vial, To Listen and to Make Heard, or the Theologian Facing Philosophy. Response to Ruedi Imbach, RThPh 2019/II, 135-142.

Taking seriously the notion of « listening reason » emphasized by Ruedi Imbach, and focusing on the question of God’s almightiness, this brief response aims to show that the relation of systematic theology to philosophical theology is constitutive of the practice of any theology grounded in the Biblical witness to God. Such a relation not only consists, for the theologian, in welcoming the claims put forth by the philosophical discourse in order to develop its own discourse, but also in showing that the idea of God which the theologian construes may make sense even for those who, like the philosopher, are not required to take their starting point in the Scriptures as they elaborate their concept of God.

Seeing in religion a historical as much as a theological fact, the 18th century has had a profound bearing on the relation between poetry and the gods. We attempt here in three steps to retrace its evolution. We start with Hölderlin, who was the first to reflect in his poems on the questions raised by the historical transformation of the gods. We continue with Baudelaire who, though he still belongs to what could be called a theological age, tests the latter’s limits. We end with Celan, the poet of the Holocaust, whose attempts to reach the sacred can only take place beyond what can be seen as God’s death in Auschwitz.